In 2005, the Library in the Hermitage Foundation Museum in Norfolk, Virginia was gutted by fire. Agrell Architectural Carving was commissioned to replace the carved oak screen, which featured an extensive amount of carved Gothic elements, including pierced and blind tracery, ornately carved columns and capitals, detailed sculptural figurines and foliage, and an elaborate pierced gallery.

The original screen was carved in the earlier part of the 20th century by a carver employed at the house and was a copy, in parts, of wood carved screens typical of those found in the West Country of England during the 14th century. The newly restored screen was carved on both sides and took the team at Agrell approximately 2,500 hours to complete.

The screen detail to the right shows the wood carved enrichment of the bressumer (the carved beam at the crown of the screen), which is not typically constructed in this fashion. The original carver, misunderstanding the construction, carved the two mouldings beneath the crown out of a solid beam, as was commonly done in the 14th century. Had he known, it would have made his life—and ours—a lot easier, as we were naturally required to follow his work.

Waterfront Lumber of Norfolk, Virginia undertook the construction and installation, and Carey Howlett, an accomplished conservator, managed the project.

"Agrell Architectural Carving contributed greatly to the success of one of my most challenging projects—the recovery from fire damage at the Heritage Foundation Museum in Norfolk, Virginia. Throughout the project, I was truly impressed by the outstanding quality of the firm's work and by Ian Agrell's enthusiasm, personable manner and professional commitment to the project." 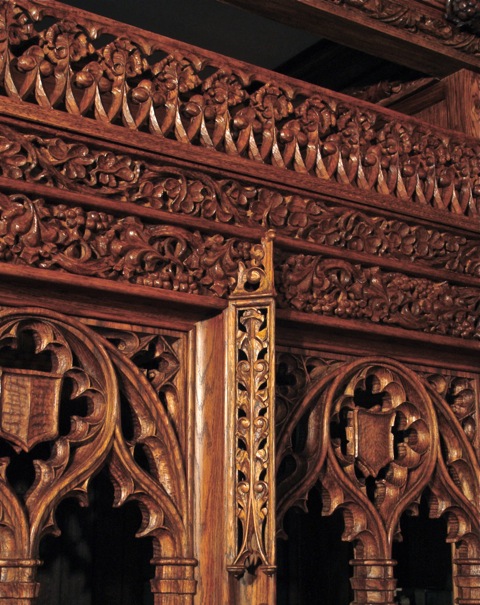