After the House of Commons Chamber was damaged during the Second World War, Sir Giles Gilbert Scott, an English architect best known for his work on buildings such as Liverpool Cathedral and the Battersea Power Station in London, rebuilt it in keeping with the original style.

Today, two sets of green benches sit opposite each other, permitting the Government and the Opposition MPs to sit facing each other. A table is positioned in the middle, with the Speaker's Chair at the northern end of the room.

The Chamber itself is actually quite small. In fact, the room can accommodate only 437 of the 659 MPs. Many of the objects in the Chamber, such as the Speaker's Chair are gifts from the Commonwealth countries.

In 2005, Wallis Joinery commissioned Agrell Architectural Carving to produce ten ornate ceiling bosses in oak to complement the original style of the Chamber. The project was on a tight schedule, but we were able to carve and deliver all ten bosses in just three weeks. 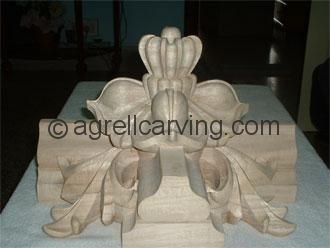 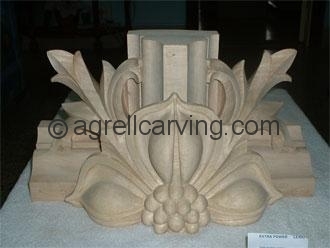 View this video newsreel film from 1948 of the carved woodwork of the House of Commons. Here you will see the original ceiling bosses being carved (at 2 minutes) along with the hand carved screen.