The Sultan of Brunei bought his secluded London residence from Prince Charles before the Prince married Princess Diana.

Agrell Architectural Carving was commissioned to produce a number of projects for the residence, including custom woodcarving for the library. The photo depicts a portion of a pediment carved in oak for one of the bookcases.

For projects similar to this one, we work in tandem with wood shops that carry out the construction, yet supply the "uncarved elements" to us for carving. Once we complete the carvings, the wood shop installs them on the furniture or paneling. For this particular project, we partnered with Paddock Hall, a company in Ipswich, England.

"Ian Agrell has worked for us on many occasions and we consider his work to be of the very highest standard."

The official residence of the Sultan of Brunei and the seat of the Brunei government, the Istana Nurul Iman palace is also the largest residential palace in the world as well as the largest single family residence ever built. Filipino architect Leandro V. Locsin designed the palace, which in Arabic means Palace of the Light and Faith, using a repetitive motif of golden domes and vaulted roofs.

In the late 1980's, Agrell Architectural Carving was hired to carve and gild a number of coats of arms for one of the palace's 1,788 rooms. The intricate carving beautifully captures Brunei's Islamic and Malay influences. 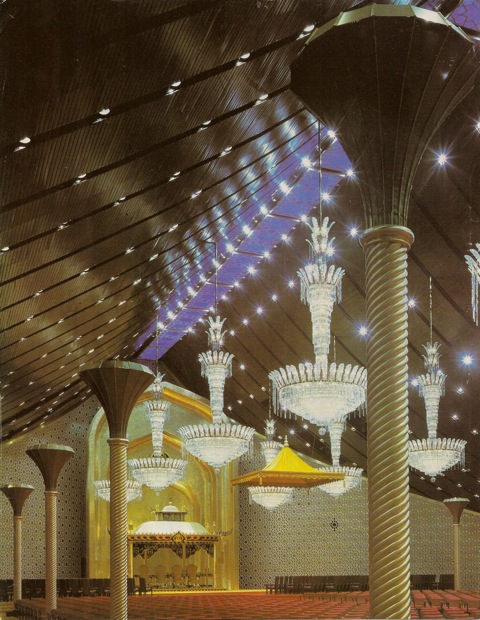