The "capital," derived from the Latin, "caput" or "head," forms the crown of a column or pilaster, which in ancient Greek and Roman architecture formed a system of supports known as orders. The three principal classical orders are Doric, Ionic, and the most ornately decorated of the three, Corinthian.

According to the ancient Roman writer Vitruvius (c. 75 BCE - c.15 BCE), Callimachus, a Greek architect and sculptor, invented the Corinthian order. His inspiration came from the sight of a basket that had been left as an offering by a mourner on the grave of a young girl. Filled with several of her toys, it was covered by a small tile to protect the contents from the weather. An acanthus plant, with its spiny, sharply cut leaves had managed to grow through and intermingle with the weave of the basket.

Depending upon the period, the carved acanthus leaves that surround the capital may be quite rigid, graphic and dry, or they may be extravagantly drilled and undercut, flowingly naturalistic and spiky. There are typically three superimposed rows of carved acanthus leaves and scrolls. Small volutes are found at the corners and all four sides are essentially identical. There is no neck beneath a Corinthian capital. Instead, a ring-llike astragal moulding or a banding forms the base of the capital, evoking the base of Callimachus' legendary basket.

One of our more complex woodcarving projects, the award-winning restoration of Bishop Sherlock's room inside London's Fulham Palace, includes ornately carved classical Corinthian capitals. In keeping with the the room's original 17th century decor, the capitals add a richness and depth that is entirely authentic and true to the period. 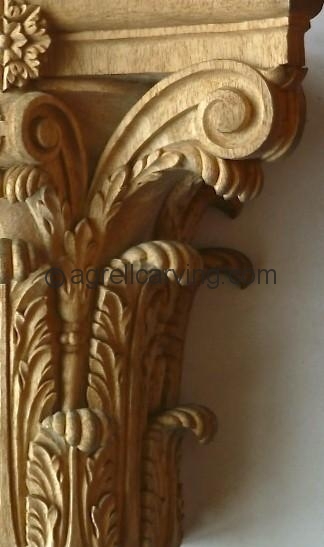 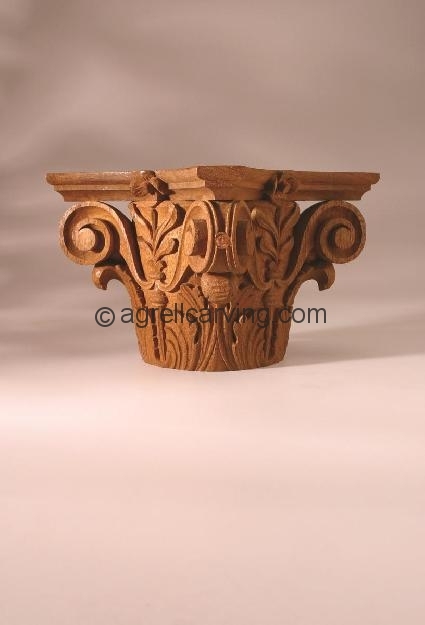