The term "Art Nouveau" derives from the Maison de l'Art Nouveau, a shop and art gallery that opened in Paris in 1895. Developed in Europe and North America in the late 19th and early 20th centuries, the style was influenced by Baroque, Gothic and Moorish conventions. However, it was unrestrained by rules and purposely lacked historical traits.

A much more carefree type of architecture, Art Nouveau integrated arts and crafts with architectural forms. Designs were often curving and filled with organic, vibrant forms, leaves and flowers, all flowing in elegant sinuous lines.

It was during the World's Fair in Paris in 1900 that Art Nouveau was hailed as the first new decorative style of the 29th century. Fashioned by a generation of vibrant, energetic artists and designers, it was a concentrated effort to create an art form reflective of the modern age. In fact, in numerous ways, Art Nouveau grew out of the Industrial Revolution.

Many artists, designers and architects embraced the new technologies that emerged during this remarkable era, while others shunned the poor quality of mass-produced, machine-made items. They sought instead, to transform everyday objects into fine art by applying the highest levels of craftsmanship and individual creativity. Designer William Morris, who instigated the Arts and Crafts Movement in England in the 1860's was instrumental in the development of this philosophy. In fact, today Art Nouveau is often considered a sub-style of Arts and Crafts.

Many artists drew their inspiration for this new style from the indigenous art of their own country. In Norway, for example, designers adapted and transformed the intricate, linear patterns of Celtic and Viking designs into more modern interpretations. In France, the delicate, curvilinear rococo style of the 18th century was modified to produce a more contemporary aesthetic.

Non-European cultures such as Japan, China and the Islamic countries were sources for inspiration as well. Japanese woodblock prints, for instance, played a role in the dynamic lines, stylized organic forms and intricate patterns found in Art Nouveau. The technical genius and intricate patterns of the Islamic world inspired many artists, such as the well-known Italian designer, Carlo Bugatti.

Short-lived yet never forgotten, Art Nouveau is a wonderfully free-spirited style. At Agrell Architectural Carving, we have recreated its sinuous, organic elegance in many superb pieces, including hand carved fire surrounds and overmantels, furniture, panels and other architectural elements. 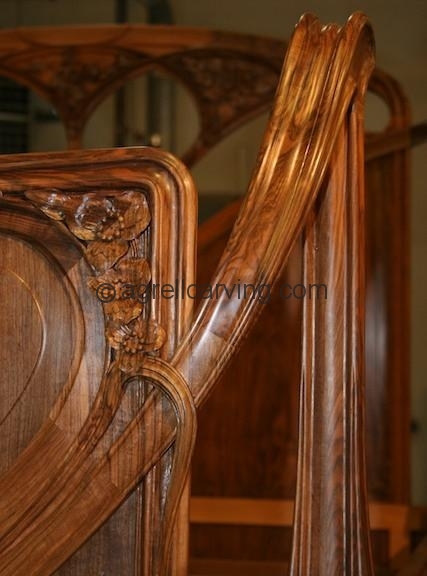