The name Byzantine derives from Byzantium, the capital of the East Roman Empire. Byzantine woodcarving originated when the eastern Christian Church broke away from Rome in 330 AD. At that time, the city of Byzantium (later known as Constantinople) became the royal residence of Constantine. Simultaneously, Christianity was established as the state religion, and this undoubtedly played a large role in the development of art in general. Unlike the art of Roman and Greece, which at the time was almost entirely aesthetic, Byzantine art evolved to be highly symbolic.

Constantinople's proximity to Italy, Greece and Persia combined with the influence of Christian religion, created a unique form of art and architecture that assimilated Grecian, Persian and Roman ideals. In general, the actual craftsmanship was somewhat rudimentary, however; the conception, symbolism and imagery were remarkable.

For instance, the traditional Greek acanthus was often combined with religious symbols including the cross-circle, vine and dove. Byzantine woodworking is one of the richest, characterised by a profusion of objects, animals, flora and human faces tht cover the entire surface, leaving little if any empty spaces between them.

Very few Byzantine woodcarvings exist, however; the main doors of the Basilica of Saint Sabina at the Aventine in Rome, Italy are fine examples. Believed to date from 430-432 AD, the doors consist of a series of 18 wooden panels. All save one are carved with scenes from the Bible, the details of which are of an unsophisticated classical style.

The Byzantine style flourished for hundreds of years, spreading from the Roman empire of the East to Asia, Italy, Russia and the Balkans. But it was the prohibition of image worship by the emperor Leo III in 726 AD and the subsequent civil wars that eventually drove many of the artisans who specialised in iconic carving to migrate to Italy and to settle in Venice. It was here that the development and culture of woodcarving really escalated, culminating two or three hundred years later in some of the most exquisite woodcarving ever produced. 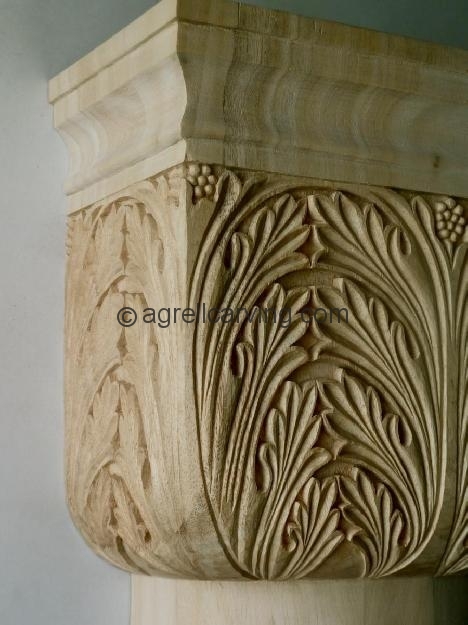