In ancient times, art was the expression of the religious feelings of a people.  Therefore, when a new religious faith was proclaimed, the development of a new art commenced.  The proclamation of the peace of the church by Constantine in 323 A.D. led not only to new requirements to meet the demands of the new religion, but to great changes in design, and eventually to a style which differed materially from that which had gone before.

The early Christian style in Rome and the West, and the Byzantine style in the East gradually transformed the ancient classic art.  A similar change took place shortly after Mohammed carried the Islamic faith through Egypt, Syria and Persia.  At first the conquerors and their new converts contented themselves with the existing structures found in the various subdued and converted countries, or, having no preconceived styles of their own, employed the native workmen to build for them. They made ample use of the materials at hand such as existed in profusion in the Pagan temples and the Coptic and Byzantine churches.

Over time, these resources were depleted, prompting the gradual development of the Mohammedan style. This style varied by country as it was influenced by local traditions, and also by the periods in which it commenced and in which it reached it fullest developments.  Thus in Syria, North Africa and Persia, the chief elements of the Mohammedan style are found towards the close of the 8th century. In Egypt, it was nearly a century later, as also in Spain where it was introduced from Kerouan in Tunis. In Asia Minor, under the rule of the Seljuk Turks of Rum, it began to flourish toward the close of the 11th century; in India at about the same time, but only in a small portion of the country, and in Constantinople toward the close of the 15th century.

In all of these countries there was one universal rule: The absolute prohibition of naturalistic representations of men, animals or plants. From the first, this led to a purely conventional type of leaf design, which often served as backgrounds for the magnificent inscription in Arabic characters, and to geometrical designs of immense variety, the followers of Mohammed being the greatest geometricians of the world.

At a later period, it led to the decorative treatment of constructional features, such as are shown in the elaboration of the voussoirs of an arch and in particular, in the so-called stalactitic vaulting, which, except in India, prevails throughout the Mohammedan style.  Originally evolving from the constructive features of small materials such as brick, it was imitated in stone throughout Syria, Egypt, Asia Minor and Constantinople, in plaster in Spain and in hand carved wood in all countries.

From: Styles of Ornament by Alexander Speltz 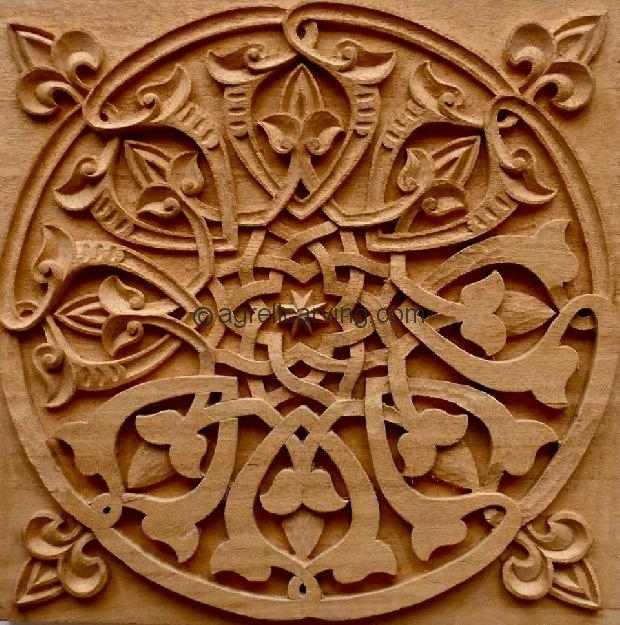