Originating in Northern France during the 12th century, the Gothic style quickly spread to England, Germany, Spain, Italy and other European countries. It evolved in response to a collective desire for a more liberal, more intellectual lifestyle, one which balanced abstract thinking and reasoning with impetuous emotionalism and religious mysticism.

The Gothic visual aesthetic is characterised by immense exuberance, at once pointedly linear and restlessly active. Leaf moulding is the primary ornamentation, always chosen from local flora. The design varies slightly depending upon the period in which it was produced.

For example, in the Early Gothic style of the 13th century, the leaves were less imaginative and more natural. As time passed, the flora took on a more forceful, energetic appearance, until finally, during the Late Gothic period, the leaves became exact and faithful reproductions of those found in nature. They appeared heavy and were often purposefully undercut, resulting in a feeling of solidity. At the same time, the hollowed leaves produced sharp contrasts of light and shadow. The overall effect was one of continual and varied movement.

In addition to plant life, human figures and animals were also employed as ornamentation, but in an exaggerated and often entertaining manner.

Toward the end of the 15th century, Gothic style woodcarving reached its zenith. One has only to look at the choir stalls, rood-screens, roofs and retables of English, French and other European churches and cathedrals to fully appreciate the level of execution, balance and proportion that was achieved during this period.

It should be noted that colour, as well as architectural conception and decorative treatment, played an important role in Gothic style. Red, green, blue, white and gilded tints were added to the carved woodwork based on the rules of heraldry. The colours perfectly complemented the priests in their sumptuous vestments, the soft candlelight, the golden crucifix, the multi-coloured stained glass windows and the dramatic frescoed walls and ceilings.

The inherent beauty of the Gothic style lies in its exquisite detail and owes much of its appeal to the ancient custom of directly employing the craftsman and his men, as opposed to awarding the work to a contractor. While one master carver was responsible for the general plan, the execution of each part and its accompanying details was left to the creative discretion of the individual carvers. As a result, the Gothic carver seldom repeated a single detail, giving Gothic style an endless diversity that imbues it with charm and interest. 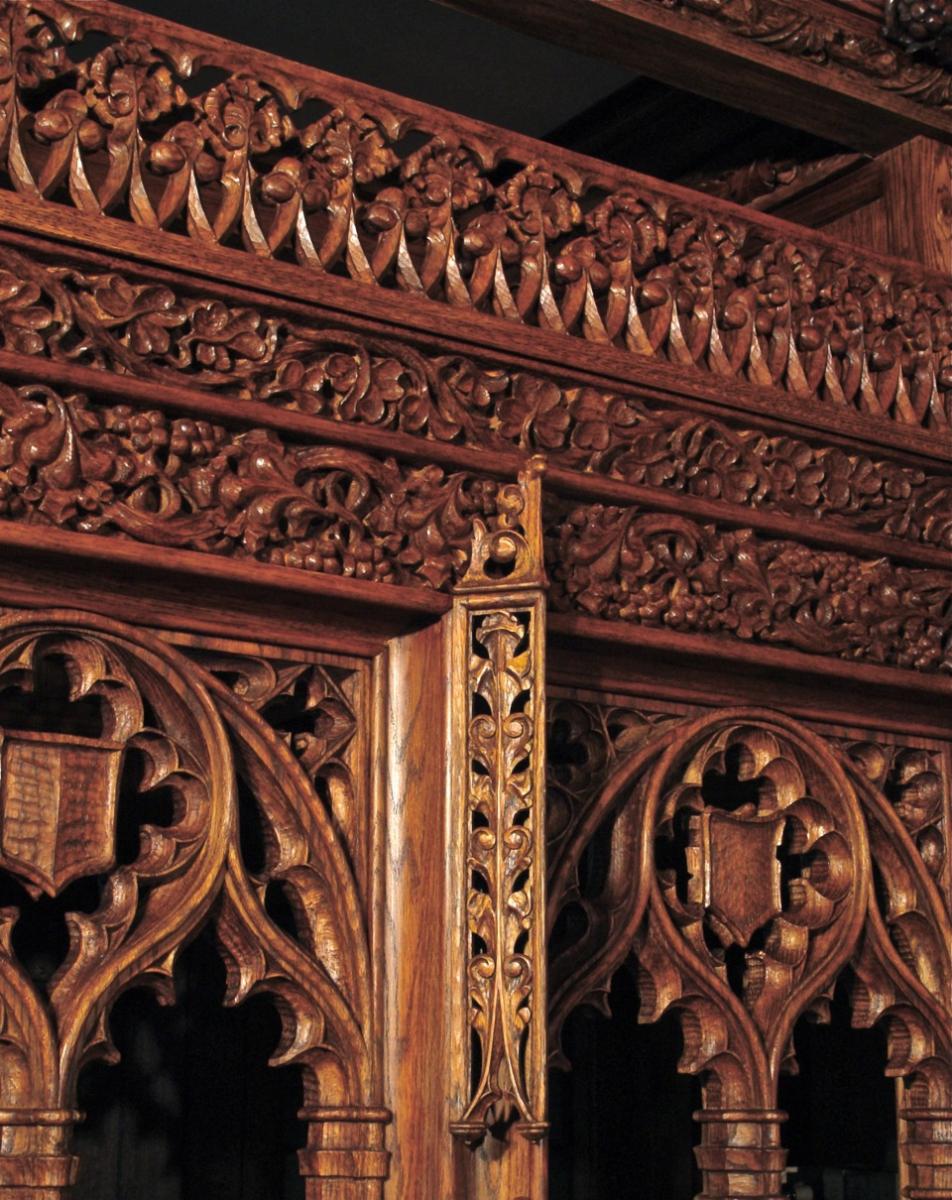 At Agrell Architectural Carving, we work in the same manner. Master Carver, Ian Agrell directs a team of skilled woodcarvers and, like the ancient Gothic craftsmen, allows the details to differ, but the main lines and grouping to correspond. We also adhere to the belief that beautiful detail does not always guarantee a beautiful composition, and thus we are careful to ensure the individual part never overwhelms or dominates the general effect. In this way, we can deliver true Gothic ornamentation in all its minute detail, colourful splendor and magnificent dimension.